Workplace conflict is inevitable. Stressful situations, performance expectations, varying personalities, etc. can be contributing factors. Responding to these conflicts and achieving resolution is completely within your control. Conflict can stem from clashing opinions, hasty judgments, and jumping quickly to conclusions. A key to settling the conflict is communication. Successful workplace communication is founded on the ideas of active and reflective listening. In order to practice active listening, you must avoid reacting, listen to your colleague’s perspective, repeat back what you’ve heard, and share your feelings. The best active listeners follow these five steps that can help resolve workplace conflict.

To illustrate this process, the explanation of each step will be followed by how that step would look in a real situation. Travis is frequently late to work, and as Travis’ supervisor, Alex needs to address the issue. Previous attempts at settling the conflict have been unsuccessful.

When a conflict arises, it’s always good to step out in front of it. It’s best to control the situation quickly to avoid a bigger blowup. Ask for their feelings and tell them you want to understand.

Alex approaches Travis and asks to talk to him privately. Once they’re alone, Alex says, “I’ve really appreciated the work you’ve done on the Jones project. You really make a difference on our team. I’m concerned about your punctuality though. It’s starting to affect other areas of your work, and affecting our team. I know that you’re a professional person and I value you, so I want to hear your perspective.”

Alex asking politely is a necessary first step, and asking to speak to Travis in person shows that Alex cares about Travis enough to address the conflict privately. Alex is honest about the issue and the effects but makes it clear that he wants to hear from Travis.

Step 2: Listen to the other side

In any conflict, there are always two sides. Listening may be the most difficult part of conflict resolution. However, understanding the other side is vital. When listening, it’s important to curb your reactive impulse. Listening to your co-worker’s point of view can help you learn something new about the situation, but it also sets them up to listen to you later. Instead of viewing yourself as the victim, listen with an open mind.

Travis says, “I know I’ve been late. My car has been having trouble, and so I’ve needed to take the bus lately. The bus usually leaves before the scheduled time, and so I’ve had to wait for the next bus.”

Alex also takes the bus, and he knows that the bus never leaves early. He suspects that Travis is getting out to the stop late, but he doesn’t say that.

Step 3: Repeat what you heard

Once you’ve heard their side, don’t immediately turn to your side of the story. It’s important to repeat back what you’ve heard to them. Don’t use blaming words when you speak. Instead, use phrases like,”So because of (this) you feel (this way)”. This allows you to show your co-worker that you are listening to what they’re saying and helps clarify miscommunicated issues before moving on.

After Travis finished, Alex replies, “If I’m understanding what you are saying, there have been some bus scheduling problems that make it difficult to take the bus and arrive on time.”

The language used above is nonjudgmental and repeats the facts. This step is extremely important because it can either make your colleague feel validated and listened to, or it can seem confrontational and cause additional problems.

Empathy is the ability to share or understand another person’s feelings. Having empathy communicates to the other person you understand where they’re coming from. When expressing empathy, it’s important to not judge the situation. If you’ve experienced a similar situation, saying, “I understand how you feel. I had something similar to me happen before” is a great way to connect to your co-worker. If you haven’t experienced their feelings before, be careful not to tell them you understand how they feel. This may create more tension.

This step can be taken in conjunction with step three. After Travis explains the situation, Alex could say, “That sounds frustrating! Car troubles are so stressful. My wife’s car had to be taken to the shop a few weeks ago, and it definitely made our mornings more complicated.”

This is not the time for Alex to lecture Travis about the bus schedule, but instead to listen.

This places Travis and Alex in a similar situation and makes Travis feel like Alex understands what is going on.

When it’s your turn to talk, don’t immediately rebuttal. Thank them for explaining their side of the story and apologize for your part in the conflict. Because you took time to listen, they will be more likely to let you explain your side, State your opinion clearly and avoid accusatory language.

Alex needs to express to Travis that punctuality is important, but also needs to be empathetic to the situation. He says, “I understand that sometimes being late will happen, but for the productivity of the team, we need to minimize that. I’m happy to work with you and would appreciate you letting me know when you will be late. I hope your car gets fixed soon so you don’t have to worry about the bus. If you could make a special effort to be on time, the team and I would appreciate it.”

In this situation, Alex validates Travis but also explains that there are expectations for being on time. Alex also uses words like “the team,” “we,” and “work with you,”. This isn’t confrontational but emphasizes that Travis’ actions have consequences.

Even though workplace conflict will happen, it’s important to do everything possible to resolve conflict and diffuse the situation as quickly and professionally as possible. Using the five active listening techniques described above will help settle work conflicts as they arise.

Are you a jobseeker looking for work or an employer looking for the right candidate? Contact The Computer Merchant today.  Call (800) 617-6172 for one of our representatives to assist you. 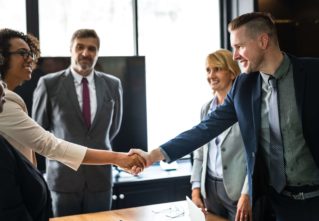 Getting a temp job is a step that some people may have reservations about. Some may fear that accepting a temporary job will get in…

Asking your boss for a raise can be a difficult and awkward conversation. Talking about money is uncomfortable for many people. Many employees struggle to…

When interviewing for an IT job, being prepared to answer any question is critical. Knowing what questions will be asked and how to prepare for…

How can we help?