Not So Obvious Mistakes That May Cost You Your Job 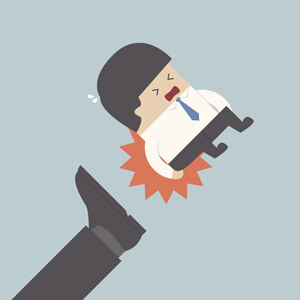 Mistakes That May Cost You Your Job

Regardless of what your company’s Employee Handbook says, most people have a pretty good intuition about the types of things that may get them fired from a job.

Stealing from your employer, in the form of taking physical items or padding work hours, is almost always guaranteed to get you the boot. So might physically accosting a co-worker and other egregious behavior.

But what about the not-so-obvious actions? The behaviors that prove that common sense isn’t quite as common as the term suggests.

Here is our list of common sense mistakes that a surprising many people lose their jobs over.

Not Learning from Past Mistakes

If I had to pick the number one most recurring reason to let an employee go, it will have to be this one.

We are all destined to screw up now and again, sometimes even with disastrous consequences. But repeatedly making the very same error will ultimately cost a person the confidence of his colleagues and management.

Not learning from one’s previous mistakes defines a person as not terribly reliable. It may not on the surface of it seem like a terrible thing – compared to other terrible things in a workplace. Over time, however, such a person will be seen as a liability rather than an asset to the company.

This is somewhat similar to our first point but often afflicts people who are otherwise very good at their job.

Here’s the thing though, when you tell someone you will deliver on a given date, you set expectations. When you fail to deliver on or before that date, the disappointment of not meeting expectation will often overshadow the quality of work. Repeat this a few times and you run the very real risk of being seen as someone completely unreliable.

While most people strive to do their very best for the colleagues that depend on their work, it is not a great idea to allow enthusiasm to overshadow realism, or allow the need to please to cause you to commit to a schedule you are not reasonable sure you can meet.

Promise carefully because the expectations you set will influence other people’s perception of you, and perception is often more real than reality.

It isn’t enough to be good at what you do today, you have to set yourself up to be just as good in your job as the job evolves and new challenges emerge. For people in IT, this is especially true; technology changes at an alarming rate. Not keeping up with changing times will not only result in your being let go, it may even end your career altogether.

It is better to take small but continuous incremental steps to stay abreast of new environmental realities than to try and catch up when you eventually realize you’ve been left far behind.

Letting Your Ego Walk Ahead of You

There are people who genuinely believe their company cannot do without them. If you think this, your ego has gotten ahead of you.

The trouble with ego is that it will make you believe you can get away with behaviors other people shy away from. It is what an over-inflated sense of self causes a person to do (or refuse to do) that will get them fired.

Starting or furthering rumors that creates internal strife between coworkers or teams, choosing sides, these are both good ways to get yourself fired. Rumors and gossip makes for an unhealthy work environment. If you have a gripe, take it to your manager or to HR.

Taking Credit for Other People’s Work

This is an obvious one. What may not be so obvious is that you can be just as guilty for taking undue credit by neglecting to attribute credit where it is due. This happens especially with managers whose junior reports do something that deserve outside recognition.

Taking credit for other people’s work is a type of cheating that will not hold a person in good standing with their colleagues.

While most professionals know it’s a bad idea to hide known issues from management, a surprising number of people do just that, often with regards to issues they hope they can fix before anyone finds out.

But what if the issue is a potentially damaging one, or one that cannot be fixed without making other stakeholders aware of it? There are few situations in the workplace more dishonest than putting individual vanity above the welfare of the team or company.

It is far better to face an internal scandal but retain your dignity, than risk the consequence of a complete loss of integrity when found out. The Volkswagen diesel emissions scandal is perhaps the biggest and costliest (for VW) example of this kind of cover-up in recent years.

Let’s face it, the always negative team member is a major drag on the morale of everyone else. It is one thing to point out potential failure points and help find workable solutions, it is entirely a different matter to always believe and attempt to convince everyone that failure is inevitable, then leave it at that.

The whole point to a bunch of people getting together in furthering a business enterprise is to achieve positive results. Positive results require positive thinking and a can-do attitude. There is simply no place for the perpetual doubter in any organization.

Emotional Outbursts and Bad-mouthing Colleagues or Your Employer

There will be days when nothing will do but to vent out frustration with work. We all do it. But it is the way a person chooses to vent that can get them in serious trouble, maybe even get fired. This one is a human failing that can catch out even the nicest, most well-meaning person.

Emotional outbursts or speaking ill of a coworker or your company is bad when done in a public space. If you must, take your complaints or opinions to the appropriate internal channel – such as your manager or HR. It is also acceptable to vent to your significant other, just don’t make a public spectacle of it, especially on social media.

Stupid Use of Social Media

What you do outside of work is yours and not your employer’s business. Except that it can be. Posting public photos of yourself behaving in a manner that significantly contradicts the ethos of your company may bring your character, and fit for your position, into question.

Here’s an extreme example. A passenger airline pilot who posts a picture of himself smoking pot in Colorado or Amsterdam (where such things are apparently acceptable) may find it impossible to convince his employer that he is fit to be entrusted with the lives of passengers. Posting pictures of yourself on a jet ski in sunny Bahamas while on disability leave also falls into the stupid category.

The Computer Merchant, Ltd. (TCM) is a veteran-owned, national provider of technology staffing solutions for commercial enterprise companies, systems integrators and public sector/government agencies.  We’ve been deploying top-notch IT and engineering talent for our clients in 48 states and across many diverse industries and cutting-edge technologies since 1980. What can we do for you?